CBD Review: I Spied a Spiedo …

So regular readers of this site, both of you, are well familiar with the Prick’s disdain for the fifth floor food hall at the Pitt Street Westfield: A good idea at the time, it’s become a victim of its own success. Simultaneously expensive and harassing, lunch there can quickly become the most jarring half-hour of a local salaryman’s day. And don’t even think about going there during school holidays.

But that’s to say there aren’t other options in the Westfield. Down a level is the somewhat bizarre-sounding fashion concept restaurant Cara & Co, which made the list of places to try for lunch long before the Herald’s Terry Durack gave it (wait for it, Sydneysiders! You’ll never guess!) a score of 14/20 in yesterday’s “Good  Living” supplement. And up a level is a row of shops housing a few more relatively civilised options: venerable chains like Max Brenner and Chat Thai (both good, but both chains), as well as Greek joint Xanthi and Italian diner Spiedo.

My advice: Forget Xanthi. We did a lunch there once, and it was just as crowded and annoying as downstairs, only more expensive. I know that with the advent of Neild Avenue in Rushcutters Bay, Greek is supposed to be the food of the moment but an hour spent trying to wrangle gussied-up souvlaki out of the staff suggested to me that this this is a moment that will pass. The “pork belly baklava”, surely not a traditional dish out of the charming little villages that the menu harks back to on every page, stands out as one of the great “too much” dishes of all time: What was the point of that, we thought as we slogged through it. Never mind Athens going back to the drachma, the whole experience devalued Greece’s gastronomic currency in our minds. 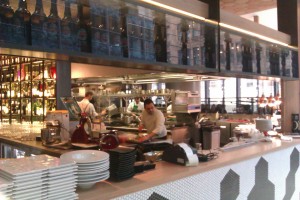 The open kitchen at Spiedo

Instead, for a good lunchtime feed in town, head next door to Spiedo. There’s a reason why Italian food conquered the world, and this is it. Now I’ve been here a few times, but generally with co-workers or business associates or types I generally didn’t want to start shooting food in front of, but the other day Mrs Prick and I had occasion to call in for lunch. Surprisingly – though, presumably unlike their accountants, I’m not complaining about this – the place wasn’t full. (Keep in mind there are two areas: the “StuzziBar”, for bar snacks and drinks, outside the restaurant, and the restaurant proper. For my money, you want the latter). 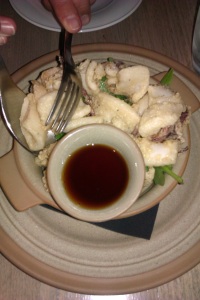 First a plate of fried calamari with an agrodolce sauce – honey-based, it was supposed to be something of a sweet and sour affair, but was mostly sweet. Too sweet for my taste, but never mind. Because what came next was what may be the perfect lunchtime plate of pasta.

Now just as the eskimos have dozens of words for snow and Australians have hundreds of ways to describe being pissed, drunk, or maggoted, Italians have countless terms for pasta. And today’s new word was casoncelli. Say it slowly, it rolls off the tongue, especially when you recite 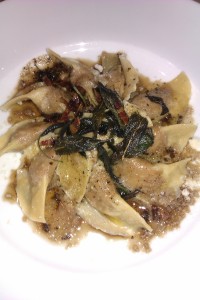 the dish’s full name, Casoncelli alla Bresciana. Which means, in plain English, semi-circles of pasta filled with pork and veal and finished off in a sauce of brown butter, sage and pancetta. You see what I mean about a perfect lunchtime pasta, right? The key here is that you get the feel and texture of pasta, but the protein ratio is far in your favour, preventing the urge to curl up under your desk for the afternoon, George Costanza-style, which often comes to me after a big bowl of midday spaghetti.

And hey, if you’re not watching your carbs, you can always get the gnocchi (also excellent, I’ve had on other visits) with the wild boar ragout.

1 Response to CBD Review: I Spied a Spiedo …