Ah, so where were in the Mudgee Chronicles? That’s right – a crummy lunch at Blue Wren. Nevermind, the view was gorgeous, the company sublime, and the boot of the Prickmobile was by then filled with boxes and boxes of the local produce. With our palates pretty much deadened by the day’s tasting, it was time to head out into the country – the real country, none of this twee weekend warrior wine-tasting nonsense – and that could only mean one thing: the Lue Hotel, a fantastic old pub next to what is billed as “Australia’s Premier Off-Road Motorbike Playground”. The beer is cold, the service is friendly; it’s like going back to another time. Specifically, to a time before the internet, when humorous cat-memes and dirty jokes were shared on public bulletin boards instead of the internet:

Gold. Palates cleansed, and pottery bought (lovely stuff, well done Mrs Prick!), it was back to town, where we learned the hard way that Mudgee is not a sleepy little burg and businesses aren’t just hanging out waiting for tourist dollars from the Big Smoke to drop into their lap. Quite the opposite: It is quite busy after dark on a Saturday, even a cold one in late June. Getting a table at one of the several decent diners in town is not as easy as you’d think – though what seems to be a local habit of not formally acknowledging the possibility of two seatings for dinner makes things worse.

We were, however, lucky enough to get seated as walk-ins in the front lounge at Sajo’s, where a new chef has been making waves: every local we looked to for a dinner recommendation put the place at the top of their list, so no wonder we couldn’t get a table over the phone. They’ve done a good job with the fit-out, keeping a great tile floor in the front bar where fresh-faced local youth were teeing off a Mudgee Saturday night, and splashing lots of rich colours and lush fabrics around the place generally. Very un-middle of NSW, if you know what I mean, though there would continue to be little reminders of geography throughout the night: A gin martini, for example, is not a half-gin, half-Martini & Rossi vermouth. Fortunately I was restrained from going behind the bar to show them how it’s done by Mrs Prick and her folks who joined us for the weekend, which is just as well as before we knew it a table had freed up in the dining room and we were sitting with the grown-ups by 8pm.

What to eat? Good question: Sajo’s dinner menu is a happy exercise in city food at country prices. With three courses for $55 (!!!) we decided to put together our own little degustations, and though they’d never heard of anyone ordering two starters and a main before, what the hell? Some highlights:

Duck parfait, duck rillette: Lovely stuff, though the rillette could have done with some more seasoning. 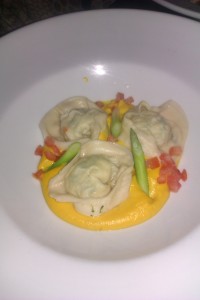 Harvey Bay scallop mousse tortellini … carrot purees often annoy me for some reason, but not this one. 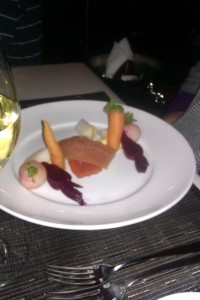 Lovely, but the table was divided as to whether the carrot was a step too far, presentation-wise

Beautiful Barra: Great piece of fish, but perhaps sitting on a king-sized bed of accompaniments where a queen would have done just fine. 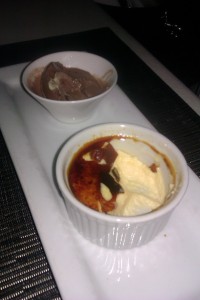 Sajo’s Brulee: Had to be quick with the camera – this was almost a shot of an empty dish!

This was good stuff, and it’s clear the chef knows what he’s doing. There are no molecular flourishes or modernist foams (though I did spot a “soil” on the menu), just big, happy flavours, nice presentations (if a little sloppy on some of the mains), served by a bright and friendly staff. Even washing it all down with plenty of local wine and tacking a few desserts on to the bill, we got away for well under $500 bucks for the four of us. It was such a good night out that I almost hesitate to mention this, but it’s too good not to share and we’ve been chuckling about it for weeks. At one point, topping up our wines, the waitress rhapsodised about the chef, his cooking, and what he’s done for the menu. The mother-in-law, making conversation, queried his working style.

“Is he a yeller?”, she asked, wondering if he was a fly-off-the-handle shouty type.

“No,” replied the earnest young server, thinking for a moment. “Actually, I think he’s of Italian extraction.”