Preliminary CBD Review: La Rosa by Any Other Name? Just as Sweet.

So there’s been a bit of talk on the Twitters about Sydney’s current crop of restaurant critics, their profile, and whether or not it is possible to, as a well-known identity, deliver a reliable review of a restaurant after just one visit only a few weeks after it has opened its doors. Certainly the present situation is a far cry from the old days. Fifty years ago in New York, Craig Claiborne set the gold standard for broadsheet restaurant criticism, a bar which in this age of celebrity critics  has long since been discarded – especially in Sydney:

Most influential of all were the rules Claiborne set for himself, which became the industry ideal. He was independent of advertising, tried to dine anonymously, and before passing judgment would eat at least two meals (later three) that were paid for by The Times, not the restaurants. Claiborne’s guidelines sent a message that he wasn’t an overprivileged and overfed man about town. He was a critic with a job to do.

There’s something to be said about these rules even for humble food bloggers like the Prick. Certainly there are some bloggers out there who are happy to take freebies, which is fine so long as they are disclosed, but I have yet to run across a post that’s said anything remotely critical of a meal arranged by some eager PR chick. And having in former lives written slabs of advertorial copy to make ends meet, I can tell you it should pay more than a free steak. As when critics life the veil, freebies change the three-way tension between chef, author, and reader and distorts the whole equation in favour of first two against the last.

I also like Claiborne’s idea that a restaurant should be visited more than once. An occupational (avocational?) hazard of food blogging is a prejudice in favour of the new against old loves; it cuts against becoming a regular anywhere. Which brings us to Nino Zocali’s La Rosa Bar & Pizza. Situated at the eastern end of the top floor of the Strand Arcade, it’s the southern Italian yin to the northern yang of its older, more formal sister restaurant Pendolino which lives at the western end of the building.

Anyway, enough geography. In the spirit of multiple visits, consider this a first look, preliminary review in anticipation of a bigger meal down the track. La Rosa’s been on the to-try list since Mrs Prick went there for lunch with her team from work and came back raving about the lasagne and the mushroom pizza, which is apparently so much more than it sounds like, involving as it does porcini puree, Portobello mushrooms, and – wait for it – béchamel sauce. Having a bit of an opportunity to go out with colleagues today, I snapped it up, and was not disappointed: like Pendolino, it’s dark, but more casual, almost Moorish, in the pre-1492 Iberian, rather than gimme-gimme, sense of the homonym. Slightly dissonant were the kitschy tunes (lots of Dino Martino, tarantella, and Mambo Italiano-type stuff; I thought Mamma Corleon 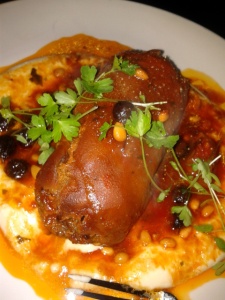 e was going to come out of the woodwork and sing) and the luxurious hit of truffle that ran up my sinuses. Someone had clearly ordered the cavolfiore al tartufo.

No pizza for the Prick, though. Instead, on what might be the last blustery day of spring for the year, braised pig’s trotter: cooked, shredded, and wrapped around pine nuts and raisins. A bit of tomato sugo, some pureed cannellini beans … bliss.

Of course, I wanted to order everything on the menu, and look forward to going with a bit of a group next time to try a lot more. After which, of course, a full report. But this first look was very promising indeed.

In the meantime, stay tuned. Tomorrow on Prick With a Fork: The worst risotto in the world!

3 Responses to Preliminary CBD Review: La Rosa by Any Other Name? Just as Sweet.