So it’s been a little while between posts, but holidays will do that to a Prick: First there’s the torpor of the time away that makes putting pen to paper unattractive (except in extremis), then there’s all the real-world work to catch up with on return. But while not much posting was done, a lot of reading was accomplished, including knocking over Bob Spitz’s new biography of Julia Child, Dearie.  For Australians unfamiliar with the name, Child revolutionised the way Americans – and eventually the world – eat. Born into a wealthy California family, her life took a number of remarkable twists and turns (a stint in the forerunner to the CIA in Sri Lanka and China during World War II, for example) even before she enrolled at Paris’s Cordon Bleu cooking school, wrote Mastering the Art of French Cooking, or made her first TV appearances in the early 1960s, appearances that would usher in the era of the celebrity chef and spark a national (if not international) obsession with food that has, through ebbs and flows, lasted five decades. 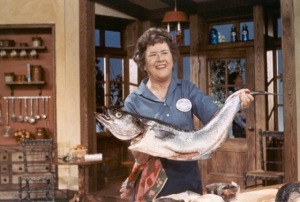 Dearie itself is breezily written, just right for poolside lounging, even if Spitz piles his sentences as high with similes as the corned beef on a sandwich at the Carnegie Deli. Child, eight years after her death at the age of 91 (she kept on going nearly to the end), remains a fascinating character, even for those with no more than a passing interest in cooking and this book gives her her due. She didn’t get serious about cooking until she was 40, when she began – with co-authors Simone Beck and Louisette Bertholle – the decade’s work that would form the basis of her masterwork. She didn’t become a TV star until her 50s. Encouraging news for anyone who’s ever wondered if it’s too late to swing for the fences. Of course, she worked like hell to make it happen, and with family money at her back and no pram in the hall she could cook endlessly, scientifically, and perfect her many hundreds of recipes. Child was a woman of dogged determination whose life was finally transformed when she found something to be doggedly determined about, yet at the same time always insisted on having fun, believing that if it wasn’t fun, and if it didn’t taste good, it wasn’t worth the bother.

Dearie is also full of great anecdotes: funny, sad, and everything in between. The relationship with her husband Paul is a book in itself. Also illuminated are characters from the food scene of the era: Craig Claiborne, James Beard, Alice Waters, and the like. Child’s principled determination to build her career and profile without compromise also comes through loud and clear – she knew who she wanted to speak to, and the mass market, initially at least, wasn’t it: no “Happy Homemaker” TV  segments for her, though there was no holding back the tide when thousands of fans would line up from dawn to see her cooking demonstrations or get a book signed. Nor could she really abide later nouvelle cuisine movements. Still, she couldn’t keep away from a TV deal either, and was a tough businesswoman who kept churning out series after series: as an aside, it was daytime viewings of Dinner at Julia’s that planted the seed of entertaining in a young Prick many years ago (though it was surprising to read in Dearie that the series was widely panned). Child also had a wicked sense of humour: the book is almost worth the price of admission for the routine she ran on a British TV producer over her mischievous mispronunciation of croque monsieur.

2 Responses to Dearie Me