Glebe Review: Nick With a Fork Goes to Tommy’s

So with the Little Pricks sweeping the prizes at their primary school’s presentation day, it was time to celebrate. And by complete accident (we were stopped at the lights on Glebe Point Road and someone said, “Hey! That place looks good!”) we wound up at Tommy’s, because, hey, you can’t go wrong with piles of schnitzel, can you? Occasional guest blogger and newly-elected school captain Nick With a Fork took time out from writing his reform agenda for next year’s Student Representative Council to kick in a brief write-up of the evening:

Yesterday me and my family (a.k.a. “The Pricks”) went to Tommy’s in Glebe and which had a very German/Czech feel to it. For starters we ordered these crumbed mushrooms that tasted like someone got KFC and made it taste good, get slightly healthy, and more German. Along with this, we had pork crackling chips, which were chewy and salty, some duck sausages which were rather fennel-ey, and some marinated Camembert. For mains I ordered a roast duck, it was so crispy and flavoursome: Mmmmm, how clearly I can remember that taste, it makes me hungry just thinking about it. My brothers meanwhile had this: For Christopher, a crumbed veal schnitzel with ham and cheese. He let me taste it, and I did not regret doing so. Elijah had a sausage platter, he would not let me touch it, so it must have been pretty good. For dessert we all had crisp apple strudels (which reminded me a bit of The Sound Of Music’s “Favourite things”, as did “schnitzel with noodles”). I could go on but nevermind that. The strudels were served with little cups of ice cream and topped with cinnamon to stop them from being too sweet, which I think worked quite well. After we had eaten this we paid our compliments to the chef and left. Oh, and also, there was a “beer prayer” on the wall of the men’s room that had me in fits of laughter, but I’m not telling you what it says, to see it you’ll have to go read it for yourself!

Photos below the fold. And in the interest of equity and equal opportunity for those who can’t get to Glebe or get into the men’s, the “prayer” was something like this old classic. 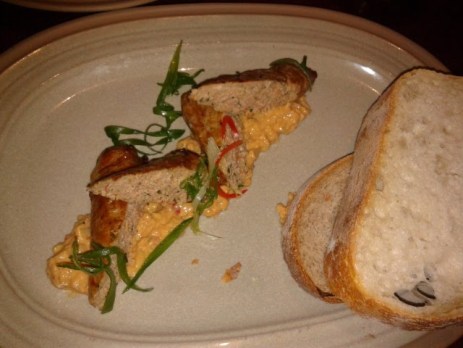 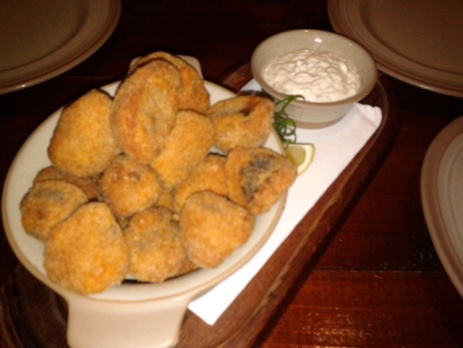 Fried mushrooms: the Pricks could eat these all night 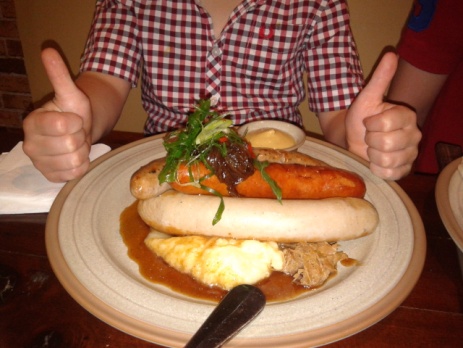 Sausage party. The weisswurst was the winner.

“Swiss schnitzel”. Bigger than it looks. Much to the delight and amazement of the Asian tourists at the next table, 6-year-old Kip With a Fork cleaned his plate.

Three-way platter: Duck, schnitty, pork belly. Something for everyone.

3 Responses to Glebe Review: Nick With a Fork Goes to Tommy’s