Come Dine With Me: Final Thoughts

Well the show’s had a couple of airings on Lifestyle and by now the secret is out: The Prick’s menu was beaten, coming second to Danielle, her mechanical bull, and her plate of (I can’t believe I’m typing these words) chicken chasseur. 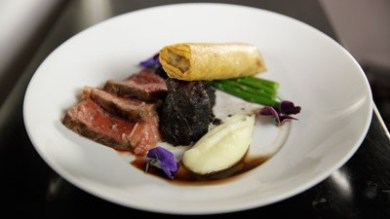 But all is not lost. There’s a second phase to the game, and if you’re of a mind to do so please pop over to the show’s “Fan Favourite” competition. If you tweet a vote my way through the site or via the hashtag #jamescdwma, you’ll go in a draw to win $1,000 off Foxtel. (If you’ve got Foxtel and missed the earlier airings, you can see all the carnage when they replay the episode this weekend on Saturday at 5:30pm and Sunday at 12:30pm and 9:30pm. It should also be up online soon.)

Blogger Reality Ravings has a pretty good round-up of the episode, and kudos to whomever is writing Foxtel’s TV listings for capturing the spirit of the week:

These self confessed foodies are as obsessed with themselves as with cooking – they’re also ultra-competitive – and take each other down at every opportunity. Mike has no qualms pointing out the faults in the food of others. For Kiri, every night is an opportunity to market herself as one accustomed to the finer things in life. Danielle is super competitive and rivals Kiri and Mike in the slag off stakes and poor James, the talkative American can’t get a word in most of the week. His food was really good, but his guests didn’t see it that way and were out to take him down.

Hang on, I’m not sure we were all obsessed with ourselves! Still, it is hard to reconcile Danielle’s rhapsodising about the beef and the ice cream on the one hand and her marking the meal a “6” on the other, but what can you do? All in all, it was a fun experience even if it was a hell of a lot of work. The number of hours and size of the crew required to make an hour of television is mind-boggling, and the shooting schedule required us contestants to be up and “on” every night after a full day, at least in my case, at the office.

Hosting on the last night was a definite handicap as well. If I’d had more energy I may have been a bit more assertive about leaving my soufflé in for a couple of more minutes (the director was calling for dessert) until it was more fully done.  (Soufflé is one of those dishes one should never attempt under pressure; the nerves come right through in the dish. Hand-rolled gnocchi is another.) With a moment’s more time I may have also espied the multi-legged intruder who caused such a ruckus; blame it on the crew who rearranged all the downstairs furniture at Stately Prick Manor and perhaps dislodged the fellow.

Cooking in front of the cameras was also an entirely different experience than cooking alone, though it was also great fun, addictively so. The only problem was that the demands of the camera meant that I had to undertake a sort of “tantric cooking”: Every time I would put something into the oven, they’d tell me to take it out again so they could shoot the action from another angle, which was frustrating when the clock was ticking and I all I wanted to do was stick the damn thing in and leave it there!

Finally, the big question: Would I do it all again?

The wise answer would probably be, “Hell no.”

But who am I kidding?

5 Responses to Come Dine With Me: Final Thoughts