Cooking With Heston. Sort of.

Yesterday when asked if she had any requests for the evening meal, Mrs Prick replied, “Something healthy.”

Hrrrrm. Well, OK. This generally means no lashings of butter, béarnaise sauces, or deep-frying. With these possibilities exhausted, this is what hit the table in Stately Prick Manor last night: 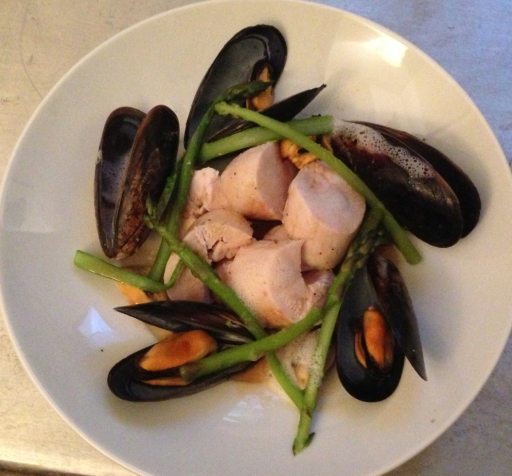 Chicken with mussels, asparagus, sherry sauce, shellfish foam. It was a variation on a recipe in Heston Blumenthal’s excellent Heston Blumenthal at Home, which is a far more useful volume than anything else in his oeuvre, because, frankly, no one is ever going to make anything out of the Fat Duck Cookbook, and like hell he’s going to spill the secrets on how its really done.

The original recipe – chicken with clams a la plancha – called for, well, clams, but they were not to be had, so it was mussels instead. The sauce was lovely, a reduction of brown chicken stock doped up with some brown butter (it wasn’t entirely healthy!), sherry vinegar, thyme, and strained. Asparagus were an afterthought, for colour. And the foam, which didn’t quite come together as it should, was a bit of showing off.

The real revelation though was the chicken breasts, which were brined (60 minutes in an 8% solution) and then rolled and cooked sous-vide for 50 minutes at 60 degrees C and seared off in a pan. What came out was perfectly cooked throughout, tender, juicy, and actually tasted like chicken – in a good way. And because they held their ballotine shape, they presented nicely on the plate. We’ll be playing around with this recipe, and technique, a bit more over the winter I suspect.

2 Responses to Cooking With Heston. Sort of.