Liberty is a precious and mercurial thing: In one place it is giveth, in another taketh away. In the US last week the Supreme Court struck down the “Defence of Marriage Act”, a bit of legacy legislation signed into law by that great defender of marriage Bill Clinton. People danced and celebrated in the streets at the prospect of gays and lesbians finally being able to legally marry the loves of their lives. Barack Obama called it (bizarrely as, if anything, the Supreme Court exists to temper populism) a “victory for democracy”.

Stay with me, the Prick is going somewhere with this, promise.  Because even as America’s wedding-industrial complex was gearing up to serve its newest and most fabulous clientele, Obama’s Food and Drug Administration was amping up its war against that great public health threat, mimolette cheese, the latest in a long series of cack-handed government attempts to tell people what they can and can’t eat or drink – i.e., what they can do with their own bodies. Yet save for a few groups here and there, the move has prompted little opposition much less organised protest. 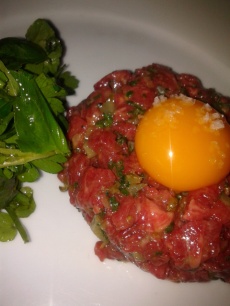 Not that Australia is immune to this – no sir. While here the gay marriage debate burbles along in the background where it will sooner or later come to a positive conclusion, the war on food continues unabated.

It has gone largely unremarked given the other news out of Canberra, but a couple of weeks ago the ACT’s Chief Health Officer (yes, there is such a position to serve the Territory’s quarter-million or so public servants) came out and gave a thumping denunciation of … raw eggs.

“If you serve raw egg products in your restaurant”, Dr Paul Kelly told a public hearing, “then you’re dicing with death.”

Thank you very much Dr Kelly, but I’ll take my chances, and if they ever try to force Sydney chefs to mix their aiolis with pasteurised Praise or abandon any hope of ever serving  a proper Caesar salad again (as you are clearly trying to do in Canberra), this is one Prick who will take to the streets.

Because risks are part of life. Getting to dinner is generally far more dangerous than the meal itself. The other night a trip to Elizabeth Street’s Fix St James involved a taxi ride with a driver who not only smelled like someone opened a spice bazaar in the men’s room of the Port Authority Bus Terminal but also could not defog his windows in the midst of a torrential downpour.

Raw eggs? I’d already diced with death by the time I got to the door and was more than happy to order up a main-course plate of steak tartare – raw beef topped with a raw egg yolk, so take that Dr Kelly! – just to wind down.

“Nah mate I’m not one of those guys who takes pictures of their food just wanted to remember the wine ya know mate?”

It was a good call, classic, with no inappropriate attempts to bring “innovation” to a dish that needs none. A Prick favourite, it’s just the sort of thing to rhapsodise over the next time some hippy starts talking to you about raw food. And this was rhapsody-worthy: The beef was hand-chopped, properly seasoned, with a thick and creamy yellow yolk ready to burst forth perched on top.

While we’re on the subject of beef, a Coorong hanger steak was similarly perfect, a tricky cut to get right, and heartbreaking when done wrong as the cut is so rare, this walked a lovely line between texture and tenderness. Not sure the mountain of rocket like Jill DuPleix’s hair was necessary, but nevermind.

Other dishes (and not many photos today; we were with Mrs Prick work people and thus discretion was the better part of blogging) worked similarly well. Mrs Prick, a great lover of cauliflower, is still talking about the soup two days later.

Duck confit? Nailed it. Likewise a sirloin was, reputedly, excellent. Someone had the smoked eel soufflé and raved; that’s definitely a “next time” dish. As are a number of others, from the brandade to the bone marrow. All of this was washed down with some lovely wines off the restaurant’s extensive and interesting list: a bit of Macon-Villages here, a little Nebbiolo there, and for once served in the proper glasses (a small but big deal if you know what I mean).

Having walked past the restaurant a million times (it looks like a café from the front but is deceptively deep), Fix is destined to become a regular haunt of the Pricks. We are already plotting return trips to attack their chateaubriand, and their Armagnac “flights”. But even without going that high up the tree, Fix turns out solid, hearty “modern classics” (if that’s not a contradiction) and does so really, really well. It stands athwart the trends that buck Sydney dining to and fro yelling, “Stop!” This is unreservedly a good thing. Apparently they also do regular wine dinners and, the place is a stone’s throw from both Pricks’ offices for lunch, which is perhaps even better. If dangerous.