One of the enduringly nice things about being an American living in Sydney is the way in which Australian friends and colleagues return from a first trip to the US completely besotted with the place. The reality they encounter is uniformly and utterly different to the ideas they have been fed through pop culture and the local media, both of which give Australians an even more distorted view of America than Americans get of Australia through the Crocodile Dundee franchise and that ridiculous episode of The Simpsons. 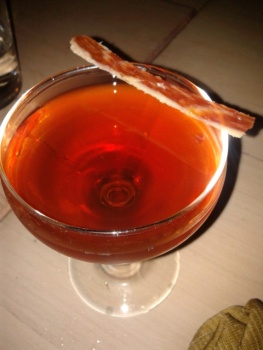 Prick With a Fatwa: The Bacon-Infused Manhattan

Thus when Australians do brave the racist, gun-loving, morbidly obese dystopia they have been told to expect (it continually amazes that despite getting rid of almost all their sub-editors, Fairfax still manages to keep US correspondent Nick O’Malley’s draft references to “AmeriKKKa” from slipping into print) they come home amazed. Upon their return the Prick generally hears reactions which range from “God, your people are friendly – not only did nobody shoot me but when I asked a stranger for directions he took the day off work to show me around his hometown!” to “Ohmigod! Freedom! I bought a carton of smokes, a case of Schlitz, a chicken fried steak, and still came away with change for a twenty! WHERE DO I SIGN UP!?”

The fact that there is a slow but building American food renaissance happening in Australia is not hurting soft power relations, either. Take Hartsyard, the new-ish American (as opposed to “New American”, but there is a bit of that in the mix too as we shall see) restaurant in Enmore Road, Newtown, where a number of bloggerati and twitterini organised by the great connector Karen Lateo and including the folk behind providore-and-ideas site Conjurup Food and blogs including Taste Explorer, Scoff and Quaff, and Local Sprouts gathered recently to celebrate free-range duck impresario Beth McMillan (of Burrawong Gaian fame) and her visit to Sydney for the appallingly-punctuated but otherwise lovely delicious. Produce Awards 2013. 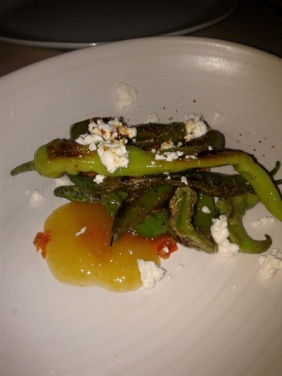 The deal with Hartsyard is that it promises down-home American country food: Real fried chicken, oyster po’ boys, pulled pork, all the virile box-tickers beloved of bored local food columnists. This it delivers, and delivers well. But in the mix are some startlingly sophisticated dishes both in presentation and technique which elevate Llewellyn and Hartsyard well above the over-swelled ranks of the brioche sliders brigades.

Our meal starts as any American meal damn well should, i.e., with a proper drink. In the Prick’s case, a bacon-infused bourbon Manhattan (complete with a little candied bacon garnish), which may simultaneously be the greatest innovation in cocktail making since Dr Wallbanger emerged from his lab, the most American drink imaginable short of moonshine, and given their various prohibitions, the most non-sharia compliant drink ever conceived. Christopher Hitchens, when asked to describe Las Vegas, famously summed it up in one word: Un-Islamic. So too this Manhattan, which couldn’t have been any more so if it had a terrier swimming in it. Stunning.

Then, food: A plate of pickled peppers – say that ten times fast – with the promise, or threat, that one of the mix might just be an outlier ready blow the roof of the lucky eater’s palate off. Fun, and a little daring, with flecks of feta and a cool apple gelée standing guard to calm any fires. Fried oyster po’ boys are lovely (if slightly out of kilter bun-to-filling wise), as are bags of popcorn with fried shrimp and an “I’ll just have a glass of this, thanks” dipping sauce.

But these are just introit before more complex and sophisticated dishes which leave the dude food in the dust. A dish of octopus, a contender for dish-of-the-night, comes suddenly out of left field and promotes a debate about cooking technique (sous-vide? brined? Chef, settle the bet!). It’s a perfect balance of tastes and textures – warming chilli, cooling sauce, tender flesh, crunchy garnishes – which also show that Llewellyn is a guy who can use tricks like ersatz sands for flavour, not just effect.

Likewise, a plate of ricotta gnudi  – didn’t see that coming! – is unexpected, and light, and a little intermezzo before duck rillette jaffles, topped with shaved foie gras and garnished with freeze-dried rhubarb turn up. Is it necessary to say anything more? Here conversation dies: eyes roll into the backs of skulls as knuckles rap out little paradiddles of approbation across the table.

Is fried. Is good.

Other dishes arrive: A plate of fried chicken, great, almost as good as the Prick makes (which is as good a review as anyone’s going to get in these parts), complete with a biscuit and a country gravy thick and rich enough to void a life insurance policy. Pork, too, pulled but really done a number of ways and topped with a maple bacon, fantastic but almost too much at this point in the evening. This is not a build-your-own-degustation place.

Our gang still has room for dessert, giving the kitchen the chance to once again prove not only that this ain’t no disco, it’s not just fancied-up hipster fried food shack either. Chocolate ganache, dehydrated mousse, sorrel sorbet, crispy quinoa, pomegranate? Yes please, and only one of a number we sampled (including a slab of tiramisu the size of a paving brick, helpfully and ironically garnished with a cursive tiramisu on the plate, as if we were in some Norton Street pasta joint).

Dessert goes a bit beyond the down-home pecan pie

A stunning night and one that bears repeating, next time with the Little Pricks perhaps. Llewellyn and Hart have a great formula going here and it is no surprise it is often booked out. Pairing high-end bistro food that veers into fine dining territory with classic comfort food works, largely because he knows where to keep them separate: More involved dishes are what they are and show great produce and great technique used to great result, but simple classics are left, largely, as they are, and as they should be. It’s a lesson more chefs should learn.

10 Responses to Newtown Review: Celebrating the American Revolution at Hartsyard