The Kidults Aren’t Alright, or, the Chur Burger that Ate Sydney

Sydneysiders, back me up here: Surry Hills, for all its glories, is also just ever-so-slightly ridiculous. You know what I mean. The blow-in hipsters. The Saturday afternoon Crown Street kaftan parade. It’s all a bit of a scene.

Scene and be seen

Add to the mix Chur Burger. Set on the site of the former fine diner Assiette, which later became the “more accessible” (but not accessible enough, apparently) Albion Street Kitchen or ASK, owner Warren Turnbull has, after a fire, managed to dumb things down sufficiently to really find the market. With some industrial stools and plywood communal tables he has created the perfect environment for people who think their McDeath t-shirt is really quite clever to get in, shove a burger down their gob, and be on their way in fifteen minutes.

Not surprisingly he is making a small fortune in the process.

Look, Chur’s burgers are in and of themselves pretty good for ten bucks. But they are nothing out of this world. A reasonably fat but not overly-filling patty that, thankfully, is not charred all the way through is let down by a lack of seasoning. A bit of extra bacon goes unnoticed and the biggest flavour comes from the pleasant umami of a rich tomato jam. It is, and may remain, a decent pit-stop for the Prick to lay in a foundation before meeting journo cronies for a session at the Clock Hotel. But “Burger of the Year”? Please. 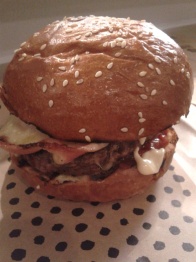 Those who know can find far better burgers in this town: While Leichhardt isn’t quite as hip as the Slurry, nor do its restaurateurs play as hard in the public relations game, it is home to the wonderful little Bonarche Burgers. Lovers of the form should do themselves a favour and make the trip: an “All-American” with extra bacon is (no surprise here) the Prick’s go-to order.

If all this sounds a bit, well, chur-lish, my apologies. The Prick is very conflicted on this whole subject: “It is not from the benevolence of the butcher, the brewer, or the baker that we expect our dinner,” the great philosopher and pioneer of classical economics Adam Smith famously wrote back in 1776, “but from their regard to their own self-interest.”

And on one level, if Warren Turnbull can make more of a buck turning out by some accounts three thousand or more burgers a week, more power to him. At $10 or more a throw, plus sides and snacks plus beers that cost almost as much again, that’s a helluva gross. Especially as the wages bill must be far lower at Chur than at either Assiette or ASK.

But the other half of Smith’s equation is the “we” and what, collectively, we Sydney diners expect for our dinner. That is the worrying bit.

Dude, we went to culinary school and did that etage at Joël Robuchon for this?

Judging by the success of Chur and legion other joints serving what are essentially gussied-up children’s menus, as well as the slow shuttering of Sydney’s fine dining rooms (Claude’s last week, who will pull the pin next week?), what “we” seem to want is to not have to sit still through a meal that lasts more than twenty minutes and, if possible, never touch a piece of silverware. Hence the present bonfire of the gastronomic vanities where table linen and silver and what were once the trappings of adult dining are tossed on the pyre to be replaced by kidult menus of sit-down street food, barbeque, and burgers.

For as lovely as tacos are, even the greatest chef can only take them so far (by no coincidence Turnbull has also opened a Mexican eatery in the Hills).

And while pulled pork is glorious, its sudden ubiquity as an every-day food – especially in places catering to the under-30 set – suggests an ironically geriatric preference for stuff that doesn’t require too much work in the way of chewing.

The danger now is that restaurateurs, having discovered a way to beat the brutal one-two punch of slow table turnover and high wage bills (the latter being a unique feature of Australia’s bizarrely-regulated IR sector), are being further pushed in that direction by publicists and newspapers who feed off the churn of mindless change. And when the tide goes out on all these trends, as it inevitably will, we will have lost a lot of knowledge, tradition, and enjoyable nights out in the process.

14 Responses to The Kidults Aren’t Alright, or, the Chur Burger that Ate Sydney