Check Your Privilege Over Lunch at Rockpool

Readers who have had the (mis)fortune to spend any time around a humanities faculty lately may be familiar with the appalling phrase, “check your privilege”.

For the uninitiated – and the Prick is sorry to have to break this to anyone who’s been out of school for a while, this sort of nonsense is still going on – “privilege-checking” is the latest effort by campus Jacobins who would rather shut up their opponents than simply argue their case. The more “privileged” one is deemed to be, the less valid one’s opinion, because after all every time a white male speaks he is just reifying cisgendered phallocentric patriarchy … yada yada yada, you get the idea.  In any case for a bit of fun some wags have come up with a calculator designed to tell you almost instantly how much the victim or oppressor you are, and thus by inverse implication, how much or little free speech to which you are entitled.

“I’ve checked, your privilege will be right out…”

No one will be surprised to find out that the Prick clocked in at 180 privilege points, and that was without any questions about eating habits. Had the quiz’s authors divined that the Prick had just come from a lunch at Neil Perry’s new, relocated, refurbished, whiz-bang but oh-so-smooth Rockpool, the scale might have been broken permanently and returned a score heavier than all America’s founding fathers, William Shakespeare, the House of Lords, Margaret Thatcher, and Larry Summers combined.

Because lunch at the new Rockpool is indeed a privilege – even if at $79 for three courses, it is not an entirely unswingable one – and a right we Sydneysiders and those who visit Sydney with means and motive must not forget to exercise, or to be grateful for. Especially when it taken in the company of solid fellows like the gent behind Jugernauts, the brains behind Ask Tony Food, and the ubiquitous Simon Leong, all of whom earn a mention for sharing generously and letting the Prick eat off of their plates.

High ceilings, a muted, masculine paint job, a tightly-controlled but entirely non-shouty and very sleek induction-powered kitchen (doesn’t anyone use gas anymore?) behind the cool black-tiled bar, the new Rockpool is an exercise in restraint and rarified calm. It is a big change from both the nearly fluorescent Rockpool of old and the creaky, boozy suburban masculinity of the steakhouse chain the new outlet usurped. Were the Prick more commercial, he’d be doing business lunches here at every opportunity.

There is no view save for Bridge Street, service is friendly but discrete, and well-spaced tables and excellent acoustics mean no other conversations intrude. The diner needs focus on nothing more than the food and his companions, in contrast to some of the city’s high-end harbourside rooms. Local House of Cards devotees might recall Frank Underwood’s observation that “money is a McMansion in Sarasota that starts falling apart in ten years; power is the stone building that stands for centuries”. What holds in Congress holds in the kitchen, especially in Sydney, where a few long-stayers like Perry survive in a market littered with $2 million fit-outs that soon land in the hands of the receivers. Rockpool is a power place, in every sense. 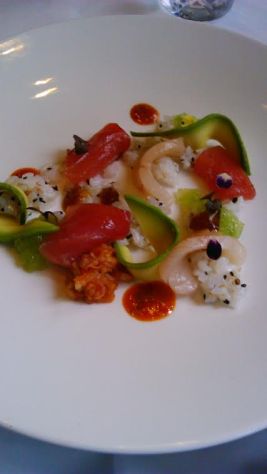 The sushi was great, but the avo? Fish out of water.

And Perry is very much there in spirit, even if the kitchen is in the hands of the very capable Phil Wood. Some dishes are starred as “classics”, and of course there is the old Rockpool east-meets-west ethic and love of great product in evidence everywhere. Even the “since 1999” motif on the front window declares continuity: As the man said, if we want things to stay as they are, things will have to change.

Thus a simple plate of chirashi zushi – raw fish with rice – is anything but simple. The rice hides bits of squid and prawn, a little yuzu, and to finish a pinch of kim-chi and just, to borrow from the parlance of over-caffeinated My Kitchen Rules contestants, pops.

Apologies for that, but there really is no other word to describe the sensation: the rice is sweet and briny; the fish melts on the tongue; the Korean pickle at the end, washed down with a glass of gruner veltliner, is bracing and thrilling like the first time you put a 9-volt battery on your tongue as a kid. The only off-note are the slivers of avocado that feel forced, like a too-deliberate reminder of its naughty nineties origins. Slowly but surely abuses like this are forcing the Prick around to Sam de Brito’s position on this over-used ingredient in any location other than guacamole or sandwiches for the Three Little Pricks.

Other starters are tempting, including a beef tartare tricked up with Chinese black olives, black bean dressing, and really great little prawn toasts almost wins the day but the Prick is a purist on this dish. Stir-fried squid with noodles gets good ratings from down the other end of the table and is, delightfully, served with bibs to protect one’s tailored shirt front a la a New England lobster shack.

Things are not always what they seem on the menu, something that can cause regret as much as reward. The Prick eschewed a main course of suckling pig due to prejudice against the accompanying “shiitake oat porridge” (it’s a texture thing, long story) but the plate is now firmly on the “next time” list.

Meanwhile a Burrawong chicken – a bird as different and superior to the nonsense you find in the poultry aisle as the car you reserved for your European holiday is to the one they try and foist on you at the airport – is given the Asian hot pot treatment, including a crock of tea-steamed rice that cooks at table. The produce is stunning, and delicately treated with a fine broth and a little halyard of noodles knotted and stowed underneath, but the presence of the word “Sichuan” on the menu had some of us looking for heat as well as light. Nevermind.

Speaking of menus, don’t go past the sides, particularly the potato “dauphines”: quenelles of potato that have been whipped and worked into a light dough and fried to puffy perfection with a bit of kombu butter for an extra kick. A bowl of these and a beer at the six-seater bar would be a one-man lunch of champions.

For those contemplating dessert, there is really no other choice but the passionfruit soufflé – tell them when you sit down and you can still make your afternoons’ meetings. The entire complement of sweets was consumed by the table, but those who got the little copper pots got the gold.

11 Responses to Check Your Privilege Over Lunch at Rockpool