New parents are never told how expensive children are, nor are they advised that there are bogeys hiding in the budget that go well beyond the foreseeable such as nappies, food, and school fees. Take birthday parties. There has not been a Saturday we’ve had the boys for weeks now where we haven’t had to ferry one or another of them off to a park, a bowling alley, or a “play centre” to celebrate some other kid’s birthday. This of course means gifts, which means another $50 a week just to hold the side and show that despite whatever your ex-wife may have said about you to the other mums, you’re really a decent and generous person.

Today was another such Saturday: After a quick swing by Kidstuff in Camperdown and dropping Mrs Prick off at the airport for her flight to Queensland, it was off to Five Dock to drop Number Two Son at a party for one of his mates. Which left me with two hungry boys and three hours to kill. And thus we found ourselves at New Shanghai Chinese in Ashfield on Liverpool Road in the heart of “Little Shanghai”. Like “Little Italys”, I’ve always been wary of urban Chinatowns, as they are generally unauthentic tourist traps. But I’ve also always had a thing for satellite Chinatowns, such as Flushing in Queens, NY. Ashfield is very much one of these sorts of places where new immigrants open authentic restaurants for their countrymen and intrepid locals.

Now I’ve always loved the xiao long bao, or soup dumplings, served up at the Din Tai Fung in the new Westfield complex, but I almost never go there any more as the food court is too frenetic. New Shanghai Chinese is frenetic too, but in a different way. We rocked up at late-lunch hour and had a table for three in under five minutes. Too bad the same would not prove true for our order.

The thing about this place is it appeared, at least this day, to be chronically understaffed with no front of house management to be seen. Thus everyone was taking orders, seating guests, bussing tables, the works. We were there for the soup dumplings, so we ordered a batch of steamed dumplings, another batch of fried, as well as some san choy bao and a plate of their “special” steamed oysters in XO sauce.

The san choy bao hit the table promptly, and was everything it should have been: crisp lettuce, rich and not-unpleasantly salty filling. The steamed xiao long bao were not far behind, and  were a huge hit with the boys. In fact, we should have ordered double: 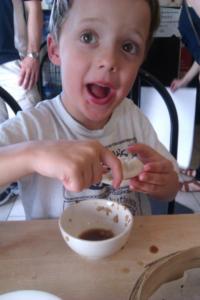 Then, nothing. Other tables, from a pair of middle-aged Chinese to an ostentatiously inner-West mum with three daughters and a Maoist Red Guard hat, got their orders, paid, and left. We had to ask three times for our remaining food, and it was only on threat of leaving – remember, we had a kid to pick up, and leaving him stranded would have been a PR debacle – that our food appeared.

I had at this point vowed never to come back, but the fried dumplings were even better than the steamed. Blisteringly hot, the casing managed a chaud-froid effect of textures: soft on the top, crispy on the bottom. The broth, what I could taste of it, was rich. And the pork, far from being the sort of bland mystery meat one too often finds in such things was the best part, rich, flavourful, and piggy.

(The oysters, incidentally, were foul: rubbery, covered in what could only be identified as a jellyfish salad, and without a hint of XO. But nevermind.)

So what’s the verdict? Yeah, we’ll be back, but we’ll also explore some of the other options in the area. The bill was less than $50, which was amazing, but getting a quick feed is a very hit or miss affair.