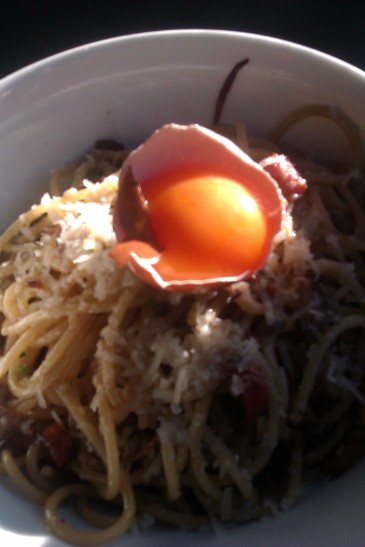 So we decided that beating the traffic was the better part of valour and beat a semi-hasty retreat from Mudgee after a late – and very, very satisfying – breakfast at the Butcher Shop Café. (Short précis: The coffee is really first rate, with a pleasing bitterness, they cook their eggs properly, thye served me a burger at 10am which I was, for some bizarre reason, gnawing my arm off for, and most importantly, it’s a joint for the locals. Which is not to say the place is unfriendly or cliquish; just the opposite, in fact. But rather, this is where Mudgeans meet and greet, and it turns out to be a favourite of local wine identity David Lowe, again, more about whom later).

We decided to go the long way around, through Lue and redneck Rylstone (“Come for the pig shooting, stay for the pig shooting!), then jagging across the Blue Mountains for a late lunch at Leura. Leura, Sydneysiders know, is a local arts-and-crafts town right out of central casting, replete with galleries, cute cafes, and shops that specialise in those awful tin-and-wire scrap sculptures of nodding cows and men in whirlybirds which one never sees anywhere else but arts-and-crafts towns. Certainly never in a private house. Eating is difficult as the main drag is dominated by gimmicks such as the “flowerpot scone” dispensary, the Wayzgoose Café. Thank God we found the Leura Garage.

Not that it was easy to get a meal there, mind you. Now I have every sympathy for Blue Mountains business owners. Their trade is all weekend, and the heavy rains of the past year have surely dampened trade. The only way to stay afloat is to wring every last dollar out of a good weekend day (such as this bright and brisk Sunday) to see one through the slow bits. But good Lord, what a shambles. Snagging a table for four was a confusion. When we sat down and tried to order at 2:45, they almost wouldn’t let us pick from the lunch menu, which is served until 3, until the harried but ultimately helpful manager sorted out instanter. A waitress brought the wrong wine (yes, dear, there is more than one Barbera on the wine list, but we finally got our requested bottle of di Lusso). We had to work for our meal, and not just in the show-up-at-work-nine-to-five-to-pay-for-this-palaver sense of the term.

In the end, it was worth it. The wine was lovely (as I knew it would be, having a bunch of it in the back of the car from yesterday’s cellar dooring) and I didn’t mind that we couldn’t get the Logan Cab-Merlot I’d originally asked for because they’d given us the wrong wine list. The spaghetti carbonara was made in the classic way, served with an egg yolk and without all that cream, and cooked just right. A ragu looked similarly yummy, and a pizza with chorizo came with a crispy crunch and more than enough heat to let you know you’re alive. Drop in when you’re through Leura, but make putting your name down for a table your first order of business.

This entry was posted in Uncategorized and tagged Blue Mountains, Mudgee, Reviews. Bookmark the permalink.

1 Response to Blue Mountains Review: Shitfight at the Leura Garage