If It Wasn’t For Confit Duck, I Wouldn’t Have No Duck At All

Conventional wisdom is nearly always wrong. Remember when Kevin Rudd was supposed to save the Australian Labor Party? Or people believed Barack Obama would usher in a new era of prosperity at home and peace around the world? Likewise, take that horrible hipster breakup song everyone claims to love: conventional wisdom says it’s the greatest piece of music penned since Mozart put quill to paper, but deep down we all know it sucks. Just three examples, chosen at random, demonstrating that when the media starts fanning the flames of an enthusiasm, the best move is to run – fast – in the other direction. Like Ozymandias, conventional wisdom has a habit of becoming embarrassingly wrong and out of date, and the lone and level sands of fad and opinion stretch far away. 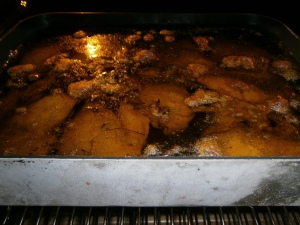 So when I read yet another piece on The Punch today (yes, I know, I was slumming) claiming that ours is a nation of “stressed out, time poor, lonely worker bees” who don’t have time even to keep the house clean or cook a decent meal I dismissed it as just the conventional wisdom-heavy work of a left-leaning union pollster whose livelihood depends on convincing readers that if only every workplace was more heavily regulated  (except of course the one he himself runs), Australians would all have time to keep the house tidy and still prepare a home-cooked meal, washed down with a government-approved number of standard drinks (no more than two standards, thank you very much).

This woe-is-us work-life balance routine is so commonplace as to be comical. Hell, half the time I’m doing the school run for the Three Little Pricks, Mrs Prick and myself hold some pretty time-consuming day jobs, yet it’s almost never too much trouble (to say nothing of nearly always less expensive) to  turn out a decent plate of food. The problem is not that most people are too stressed or busy to cook, it is that they just don’t plan ahead.

Take the other night, when Mrs Prick and I had what may be the ultimate fast food: Duck confit. 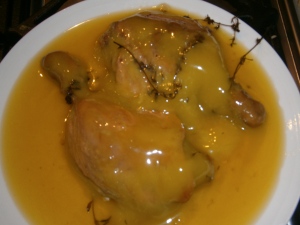 Confit duck, ready for searing — put this fat back in the tub!

Honestly, every reader should make a tub of this stuff to keep in their larder over winter. While it takes a few days to organise, the time one needs to spend actually doing things is minimal: again, the conventional wisdom that duck is fiddly and hard to prepare is just plain wrong. The ingredient list is simple, just duck Marylands (or legs), salt, aromatics, and some fat. And it’s both scalable (in fact it is almost easier to make more than less) and – as I found when we took a huge lot down to the snow last week to feed an army of hungry skiiers, it’s a dish that travels very well indeed.

Your first step should be to rinse, pat dry, and cure by mixing salt with herbs and spices. Some recipes are very precise on this, and many chefs (such as Thomas Keller, to whom I normally defer in all things) like just a bit of thyme, bay leaf, pepper added in for flavour. After much experimentation, I prefer a bolder approach: along with those traditional “green salt” adds, I also crush a few star anise, coriander seeds, and juniper berries. Spread this stuff all over the dried duck pieces, cover with Glad Wrap, and refrigerate for at least 12 but no more than 24 hours. See how easy this is?

Next step: Confit. Pre-heat your oven to about 85 degrees C (that’s about 185 F). Rinse off the seasoning, and immerse in a baking dish or other vessel such that you can immerse the legs completely in your fat medium. Traditionally duck fat is used, but if you’re not raising ducks yourself this can be ruinously expensive.  Instead, I use olive oil, a tip picked up from the great Michael Ruhlman. Stick ‘em in the oven for about 12 hours, and you’re almost done. Again, simplicity itself.

Finally, when the meat has pulled back from the bone and the meat is buttery when pierced with a knife, take out the pan and leave to cool. Put the duck legs, with enough fat to cover, in a container and refrigerate. My friend, you now have duck confit, and it’ll last for months in the fridge, preserved in fat (and both duck fat and olive oil are, all things considered, reasonably healthy) and ready to cure your work-life balance blues. 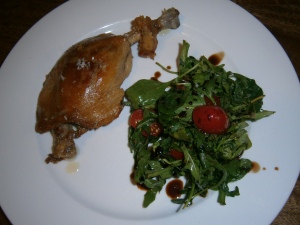 After that, things are simple. Sear off the legs as need be (as we did earlier this week): crisp up the skin, warm them through, and serve with a simple salad. Rich and delicious. Pair with a few slices of seared duck breast and perhaps some  pureed potatoes, as I did at the snow. Or shred the meat and make rillettes, an easy and quick spread when people come by the house. A scoop of rillette is also a great treat in the bottom of a bowl of chestnut soup. Whatever you do, it’s easy, elegant, and a great thumb in the eye to those who promote the idea that we’re all too feckless to organise our lives. Living well, after all, is the best revenge.

7 Responses to If It Wasn’t For Confit Duck, I Wouldn’t Have No Duck At All

Leave a Reply to Dr Duck from Goulburn Cancel reply