There’s an old foodie rule that runs roughly as follows: If you’re looking for good Italian food, don’t go to any suburb that bills itself as “Little Italy”. Living just over the road from Norton Street, Leichhardt, in Sydney’s inner-west these past two years has for the most part proven this right. Not to say that there aren’t exceptions: The Pricks used to be fans of a place called Carpaccio, which later re-birthed itself as La Fontana. The food was never fantastic, but they knew how to take care of their regulars. Once, after taking a call from the back of a taxi that  was blasting across the ANZAC Bridge around 10pm after a corporate Christmas party that featured of all things an all-you-can-drink artisanal vodka bar, the kitchen got two massive bowls of duck ravioli to hit the table just as we, well, hit the table – saving the evening and, very likely, the following day. Sadly they folded several months ago, and since then, we’ve been bereft. We tried Elio, and had a passable meal, but it was nothing to write home about. We gave Grappa a shot and had a truly execrable night, from the too-loud music to the utterly confused wait staff to the duck breast that required a Dremel to cut through.

So it was with some trepidation that we wandered into Aperitivo on Norton Street. Still, the menu, listing a raft of stuzzichini as well as wood-fired pizza, looked promising. The space, nothing flash with little to draw the eye beyond big reproduction cut-outs from old Campari and Aperol ads, is divided into a wine bar up the front, dining room up the back. The welcome and service, friendly and all-in, was pitched right.

Aperitivo actually has the potential to up-end the Little Italy doctrine. The dishes that hewed closest to the mother country were the best, by far, while those flourishes that went in the other direction took the meal in the direction of “meh”. 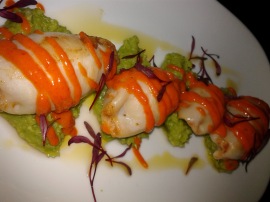 Stuffed calamari, with perhaps too many trimmings…

A twice-cooked pork cheek nestled in a dish of runny truffled polenta (to Aperitivo’s great credit, this ain’t no jumped-up chicken parmigiana joint) had the boys all but stabbing each other with forks as they fought for the last morsel. The antipasto platter was heaped high with smallgoods. Chorizo-stuffed calamari was a hit as well, though the filling felt more Espanol than Italiano, and the chef could have lost the mash of green beans and lurid drizzle of sriracha to make for a purer dish. There are many, many other stuzzichini we want to try next time, from zucchini flowers to pot-roasted rabbit to cannellini bean soup with mussels and, again, chorizo (que?). 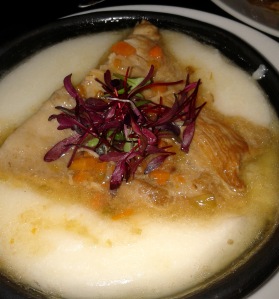 Feeling cheeky: I almost got pricked with a fork fighting for the last bite of this guanciale…

The nice thing is that many dishes were – are – classics, and never feel dated. Other areas of the menu could use a bit of a contemporising. Mrs Prick liked her little round of molded salmon and avocado with a soy-mirin dressing was refreshing, but there was nothing Italian about this dish which felt plucked from a dinner party or wedding hall menu ten years ago. And truffle oil is great, but with locals growing the real thing it’s not the synonym for luxury it once was. 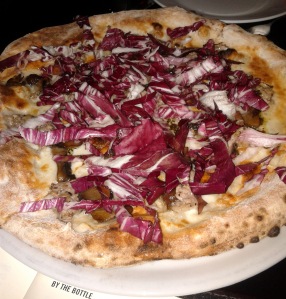 Dont be fooled, all that lettuce is just a cover for lots of meat and cheese

Pizzas, again, were classic wood-fired Neapolitan numbers. While not quite up to the standards of, say, Lucio in Darlinghurst, they were very good indeed, and we fought over a pie covered with slabs of prosciutto and another dotted with truffled sausages and taleggio with an (over)generous shake of sliced, raw radicchio, most of which wound up on our plates. Sorry guys, but everybody knows you don’t win friends with salad. Still, there’s a lot to like about Aperitivo, and it wouldn’t be hard for there to be a good deal to love. A few more pastas (even a duck ravioli, perhaps?), a gentle edit of the menu, and the Pricks might just have their new neighbourhood Italian.