So Palm Cove, just north of Cairns, is for the Pricks’ money one of the happiest places on Earth. It’s an easy flight from Sydney, not withstanding the risk that someone will squeeze their two toddlers into the seat next to you and leave them to watch Dora the Explorer on a portable DVD sans benefit of headphones: the only thing to do in such a circumstance is suck it up, order another drink, and remind one’s self, “Hey, at least I don’t need to have my kids’ names tattooed on my forearms to remember who they are.”

Palm Cove is also home to an impressive little string of restaurants just along the esplanade, including the great Nunu’s, more – much more – about which later. But while I know we’re on holiday and I probably shouldn’t be blogging, much less in a bad mood about anything, last night’s meal at Bella Baci undermined what I always considered an unspoken, but still bedrock, principle undergirding the social order of a free, restaurant-going society:

Namely, you can’t as a restaurateur go charging $45 for a ‘special’ that involves a timbale of rice, an overcooked hunk of fish, and zero irony. Especially when you’ve talked it up to your customers (with no mention of price) only to deliver this: 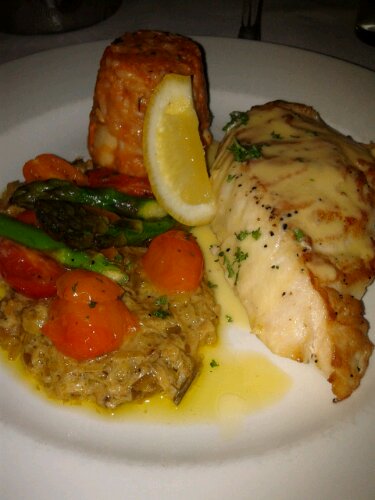 This sorry plate followed a dozen oysters, shrivelled numbers allegedly from Coffin Bay though they may have suffered in the journey. Having ordered our twelve “half natural, half Mornay” (the latter normally a Mrs Prick favourite, though these were salted to near inedibility), rather than putting a straight dozen on the bill, they hit us for a half-dozen times two, thus allowing them to charge us seven bucks more. OK, technically speaking allowable, but in context poor form.

Because of its proximity to Cairns, and because so many people come back year after year, everyone is a potential repeat customer: thus most restaurants know enough not to play the tourist trap game of gouging clients for all their worth because, hey, when are we ever going to see them again? Elsewhere here gets it, and many happier posts are in the pipeline. But Bella Baci? Not so much.