Palm Cove Review: The Hedgehog and the Fox Visit Vivo

It’s a floor protector! No, it’s an entree!

Back in 1953, Isaiah Berlin tossed off a little essay called “The Hedgehog and the Fox”. Riffing on a fragment of poetry by the 7th century BC Greek Archilochus (“the fox knows many things, but the hedgehog knows one big thing”), Berlin’s was a breezy number that caught fire in the American high-middlebrow culture of the era and still smoulders six decades later. Whether it is Claudio Veliz’s masterful discussion of the difference between Latin and Anglosphere economies or a Woody Allen character who can’t enjoy sex with her husband because whenever she is in the marital bed she starts sorting her friends into hedgehogs and foxes, the phrase remains a useful shorthand and cultural shibboleth. Problems only arise, of course, when foxes try to be hedgehogs … or vice versa. 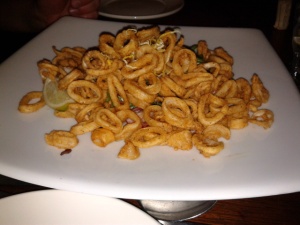 Take Vivo in Palm Cove. Enviably situated in a breezy free-standing structure pretty much at the half-way mark of the town’s main drag along the beach, all deep verandas and open spaces, the place draws a crowd for a rolling series of menus that start with breakfast and keep customers coming back right through dinner, dessert, and after-dinner drinks. This would suggest the kitchen is a bit of a fox, knowing many things well, or at least would want to be. And the large dinner crowd the night we visited would also suggest that they indeed knew what they were doing, at least as far as dinner was concerned.

Well, to use another breezy catch phrase, “not so much”. When it comes to the main meal of the day, Vivo tries to do the old mod-Oz/Mediterranean/Asian fusion thing, but with predictably mixed (ahem) results. A “calamari salad” starter was pretty much a giant pile of fried squid rings over some greens with nothing but a squeeze of lime on the side by way of dressing: fine in a pub, I suppose, but not at a sit-down diner. Another entrée, Hervey Bay scallops with a potato foam, crispy prosciutto, and parsley pistou came closer to the mark: the flavours were all there, the parsley pistou sang of garlic and the Med (though the “foam” was more of a syrup, points I suppose for trying) and the dish could have been really great, but the poor little scallops were hard, over-cooked rubbery little discs. Get four and you could put them under a dining room chair to keep the legs from scuffing the hardwood floor.

Mains, again, disappointed. A yellowfin tuna steak, requested rare, came well-done, but at this point in the evening we were too busy to argue. Though as a minor point of ethics and etiquette, since we’re probably not even supposed to be eating the damn things anymore, if we are serving these beasts up, shouldn’t we treat them right? The fish came atop an odd bowl of vermicelli noodles in a nice dashi broth with a lot of Asian stuff on top. Was this supposed to be a high-class pho? Whatever it was, it was hard to eat – difficult as it is to saw away at a piece of overcooked protein on a solid plate, on the shifting sands of noodles and stock it is nigh well impossible – and ultimately insipid. Keeping it simpler was Mrs Prick’s linguini, which was at least straightforward and filling. 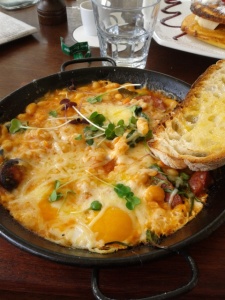 So it was with some trepidation that we went back for breakfast a couple of days later. It turns out that Vivo, despite its more foxy intentions, is more of a hedgehog, and what this particular hedgehog knows well – really well – is breakfast. So well that we went there three, maybe four times, over the course of the week. I could eat their “baked beans encôtte” every morning: eggs baked in Vivo’s own house-made cannellini beans, chorizo, all finished under the salamander with a heaping of gruyere. The sausage omelette – more of a frittata – will keep you going all day. Hotcakes: similarly great, though they skimp on the syrup and you have to go back to the kitchen to get more. They also make a killer bloody that includes a dash of port, something I may have to consider in my own recipe.

To make a long story short, when you’re in Palm Cove, be a fox, not a hedgehog. Start your day at Vivo, but get to know everywhere else in town well.

1 Response to Palm Cove Review: The Hedgehog and the Fox Visit Vivo