Posted on December 2, 2012 by chiefprick

The joy of returning safely back to Sydney after a weekend on the NSW Central Coast without having a run-in with a single rat-tailed local was tempered when, pulling into the Norton Plaza centre in Leichhardt to pick up a few supplies, I discovered a dozen prime parking spots blocked off: 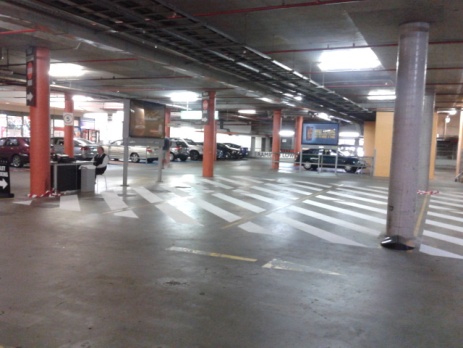 It’s the new thing, apparently. Valet parking (by “Gieves”, no less) at $10 for the first hour, presumably just the thing for when one really can’t wait an extra second to get into Coles or the two-dollar shop. I asked guy operating the “service”, a hangdog middle-aged bloke in a rent-a-tux who sat soaking in a fug of sleazy failure of the sort one generally associates with Julia Gillard’s exes what the story was, but he only sort of grunted something about it being “every day”.

Truly a horrible idea. Now there is nothing wrong with the principle of “user pays”, or charging a premium for better service: The Pricks happily buy the exit-row seats on Singapore Airlines, for example, which is one of the best little deals in travel.

But this is entirely galling. We’re talking about a shopping centre in Leichhardt, not Woollahra. And as a rule, it is tough enough to find a place to park in Norton Plaza without some spiv locking up a big chunk of prime spots. (If someone else is doing the driving, why don’t they put the valet spots downstairs, down the back somewhere?) The Pricks easily pump a grand or more through the centre’s businesses in any given month and this is the thanks we get? Pay up or it’s that much harder to find a place to put the Prickmobile?

Indeed the entire business model seems flawed and designed to alienate customers right before Christmas (smart move, guys!). The centre’s site claims that “This convenient service aims to add value and assistance to you, our loyal shopper as well as an extra point of difference to your time at Norton Plaza [sic]”.  Which is a less-grammatical version of the typical spin we’re all used to seeing trotted out by utilities, government departments, and other agents of Satan when they try to sell the public on cuts to front-line services or new and increased fee schedules. One wonders how the centre’s tenants feel about this given that parking – or lack thereof – is so crucial to their trade. Is the centre hoping that once the entire rest of the lot is filled up, enough people will pay for premium spots? Or will they go elsewhere? Certainly the Pricks will now do more of their food shopping over at Broadway Central.

It will also be interesting to see how the Leichhardt locals, who cloak their right-wing Tory aspirationalism in a green-tinged egalitarianism, respond. If Norton Plaza’s managers run into trouble, they’ll need to re-brand this not as a convenience but as a push to “nudge” drivers out of their cars and onto bikes.