So Mrs Prick was very generous to the inhabitants of Stately Prick Manor this year and the batterie de cuisine is all the better for it. Two new toys rate a special mention. First off, a beautiful hand-hammered Shun santoku has me all but ready to send the old block of Globals off to the tip, or at least stick it in cupboard in anticipation of the government’s next buyback of potentially dangerous things. The word santoku comes  from the Japanese “three virtues” or “three uses” (i.e., slicing, dicing, and mincing) but it does a lot more than that, from breaking down birds and slicing meat to doing more delicate work with vegetables. First thing I did when I took it out of the box was slice a tomato in mid-air: it was like a TV commercial.

The other fun kitchen present was an Oregon Scientific remote BBQ thermometer, which  comes with a control unit that tells you what temperature your meat has hit wherever you are in the house. As your roast or whatever cruises towards the target temperature, a HAL-9000 voice – if HAL-9000 were a pleasant lady from the American Midwest – announces, “It’s almost done. It’s almost done.” The only caveat is that it is, presumably with liability in mind, too conservative about temperatures. Thus it suggests that lamb cooked (before resting, when the core temperature will continue to rise) to 63 degrees C will come out medium-rare. Desiccated is more like it , so if you invest in one rely on your own temperature targets, not the machine’s. 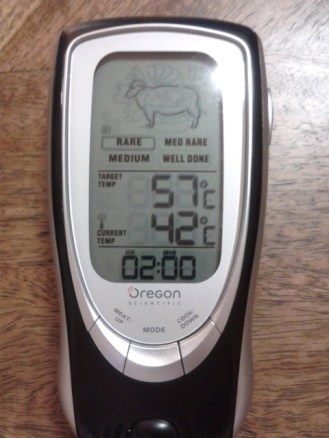 Did Santa leave anything good in any readers’ kitchens this past year?