Yarra Night One: Beering it Up in the Wine Country

Posted on February 2, 2013 by chiefprick

And thus it was after an agreeably pointy-ended flight to Melbourne, followed by a slightly less straightforward ride out to the country, that the Pricks found themselves in Yarra Glen, bang smack in the middle of the Yarra Valley at the start of the Australia Day weekend. As Sydneysiders, it was disorienting:

After all, Yarra’s a relatively short run out from Melbourne, yet it was the start of the holiday weekend and the place was not, as we had expected, teeming with Melbournians. The Hunter Valley, Sydney’s closest comparable wine region, is at least twice as far from the Big Smoke and on any given weekend – to say nothing of a holiday – is over-run with tour buses, hen’s parties, and concert-goers banging through more cellar doors than a Kansas tornado. Not that we missed them, but walking down the drag, the big question was, Where is everybody?

Well, not the only question. There was a more pressing issue on the agenda, namely, Where the hell can a Prick go to get some dinner in this town? The Yarra Glen Grand most assuredly isn’t, and as for Chateau Yering, we were booked in the next night. Happily, down one end of Bell Street in what used to be the town’s bank we found the Hargreaves Hill Brewing Company. What a lovely spot. And again, why the place wasn’t completely over-run and turning people away at the door was a mystery to us. 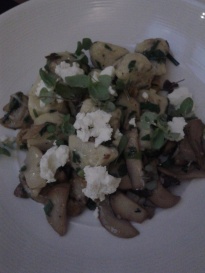 No knocking this gnocchi!

Because there’s no better way to kick off a long weekend in the vines than with a few hand-crafted beers and some straightforward, locally-sourced gastro-pub cuisine. We teed off at the charming four-seater front bar; Mrs Prick dove straight into the Hefeweizen, a lovely number lighter than one expects thanks to a blend of wheat and barley. I worked my way around the taps: a sentimental favourite was the latest release of their “Phoenix” red ale, so named because its brewed every year in the brewery reconstructed after the Black Saturday bushfires. Happily it did not encourage maudlin or morose reminiscences so much as an almost Eastern serenity and calm. Though this could have also been a side effect of their Russian Imperial Stout, a big black bastard of a beer (words written entirely affectionately) weighing in at around 12% alcohol. Boom.

We made it to a table before things got too out of hand: time to eat. The menu is straightforward, local, broken down into “nibbles and starters” and “larger plates” with not too many items. Still there was much to tempt, including the specials, so we split the difference and shared the house-made gnocchi – a simple pan-fried gnocchi with feta and herbs. This was what I was hoping for – but did not quite get – at Sede a few weeks prior.

Then, mains.  The Pricks are big fried chicken fans, and a few times a summer at the Stately Prick Manor Test Kitchens put Thomas Keller’s recipe through its paces. So we were both intrigued and concerned by the menu’s listing of “southern fried chicken”: Could a chef in country Victoria pull off such a quintessential American dish? Answer: Yes, and pretty well. Mrs Prick’s bird had spent a while in the brine, we suspect, which made it tender as all get-out, but the crust could have been crispier (though it hardly lacked in flavour. Meanwhile a 500g ribeye, from just over the hill in Gruyere, was ordered rare and came rare, and was a pretty perfect bloody (in both senses of the word!) steak. No room for dessert we walked off our meal, the better to get a good night’s sleep for the big day of swirling, sipping, sniffing, and spitting (as if) ahead.

7 Responses to Yarra Night One: Beering it Up in the Wine Country