Happy Birthday Mrs Prick at est., and is Justin Hemmes a Great Man or Are We All Hegelians Now?

The “great man” theory of history may have gone the way of slide rules and corporal punishment in the nation’s classrooms but that does not mean it is entirely without merit. Individuals are often – usually – more important and more profitably studied than historical forces gazed at through an unfocused haze of anonymous Hegelian inevitability. Was the collapse of the Soviet Union foreordained? Perhaps, but the tale is pretty dreary without its Reagan and Thatcher and Gorbachev and Pope John Paul II.

Likewise in Sydney we tend to look at food trends – which are every bit as interesting as any history or politics because what we eat, we become – as impersonal tides sloshing back and forth. Thus today fine dining is out, “fun” finger-licking food is in, and we are all just borne along the anonymous current, ready to take our orders from the weekly “Good Living” and the latest dispatches of the freebie bloggers.

To which the Prick says, bullshit. People – individuals – drive what is on our plates as much as they do our politics or anything else. 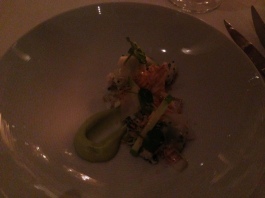 A couple of days before we went to est….

Think of it this way: If some future group of high schoolers studying the History of Australian Gastronomy as an elective wants to study the way we eat now, the teacher would do far better to assign writing one paper on restaurant/nightlife impresario Justin Hemmes than a dozen essays imagining what it would have been like to be an Irish barmaid/Tongan bouncer/English chef-in-exile in 2013 and analysing their experiences through materialist perspectives of race, power, and class.

Hemmes is one of the great paradoxes of Sydney, and his effect on the town dominated discussion on a recent evening as we Pricks first hurriedly skoll a martini at Ash Street Cellars – the Mozart we were hearing at Angel Place required no fortification, but the presence of an experimental concerto on the program made an infusion of Hendrick’s the better part of valour – before finishing up the night with dinner at est. to celebrate Mrs Prick’s birthday.

The conclusion we came to was that because of the size of Sydney, and the footprint of his empire, Hemmes and his Merivale Group have all sorts of distorting effects: Yes, he gives us nice things, but he is also the reason we can’t have nice things. 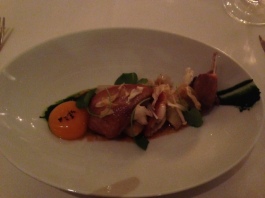 Certainly Ash Street Cellars – and that whole little multi-culti pleasure strip it sits in like the international pavilions of an adult-focused, upper-middle-class Disney theme park – is great. And est., well, it is hard to find fault with Hemmes and chef Peter Doyle’s “big event” room, even if the Herald did just knock it down to two stars.

Concert over, we hurry down George Street for our reservation and upstairs past the thrum of Establishment to one of the most serene rooms in town: startlingly under-booked on a Thursday night, we are fawned over in a spectacularly non-obsequious manner. It is just a little dim, very calm, but not stuffy or overly formal; while est. is a known quantity for bringing out-of-town corporates for a feed, on our night it is mostly celebrating couples and one happy group of friends. High-end chilled, in other words.

Glasses of Ruinart and a dozen plump, tight, briny little Sydney Rocks from the South Coast, some of the best we’ve had, tee us off as we go the four-course menu: Neither of us can hack a full degustation on a school night, and this way we get to try different things.

…giving this whole venture a bad name, and making the Prick self-conscious about the iPhone…

A tortellini of foie gras is dressed at table with a gorgeous, tourmaline-brown game consommé that makes the dumpling all but extraneous; a tiny drop of remaining unclarified fat on the surface gives the eye a focal point with which to find its depth and a spoonful hits the tongue like a gorgeously written 5,000 word argument that is the last word proving that classical French technique will always, always be tops.

A second course – scallops with a number of garnishes and a sort of foie gras mousse for me, a poultry-thon of quail breast and confit chicken wing with egg yolk for Mrs Prick – is just as artful, and more substantial. These are real plates of food, not just a few dots and smears on the plate. Doyle could sell that mousse in takeaway cups and I’d pay $50 for it on a lunch break, while the various elements in Mrs Prick’s dish stand apart yet play together. A smokiness in the wing (why was there only one!?) suggests a multiple treatment of brines, smokes, and low-temperature fats, while the egg yolk is the best treatment of chicken fruit we’ve seen this side of Gumshara. As close to perfect a plate as we get all night.

…and resulting in even worse photos than usual…

The third course – main mains, one might say – keeps us both on song with our half-bottle of Cote Rotie (school night and all that, though there may have been a cheeky half of something else beforehand).  A duck breast and a saddle of venison come with a variety of accompaniments – little pickles here, little fried fingers of semolina there and bits of bobs of produce that one simply will not find at Harris Farms – to allow mixing and remixing of flavours and fun.

To finish? Well, everyone says the soufflé is the go, and thus it is, light, perfectly executed, though so light – and yes, light is the point – as to almost be too rarefied. A little glass of Chateau d’Yquem – hey, it’s a birthday, right? – and perhaps a gratuitous Calvados for the Prick, and it is time to leave, feeling very full and fat and happy indeed.

At least until it is time to rejoin the throng of Hemmes’ other guests and find a cab home along the thudding vulgarity of George Street.

Which brings us back to the problem with a guy like Hemmes. From his castle he sallies forth to build beachheads in ever more suburbs from Potts Point to Surry Hills, giving us Sydneysiders just enough of what he – or we – think we want to keep us happy, but with a hefty if often unseen price.

…plus, we were a little pissed.

His big bars in town are magnets for punchy bogans and open-collared “junior managers” looking to pick up or pick a fight (not that Hemmes’ bouncers are much better behaved). But each time they act up every bluenose from Barry O’Farrell on down gets his knickers in a twist and calls for ever more restrictions on bars, higher prices on booze, and the spread of plastic sippy-cup drinking because none of us can be trusted with glass.

(The moral hazard created when New South Wales’s constabulary will issue tickets for punching peoples’ lights out on the street and magistrates find themselves hard-pressed to give a year inside for a near-fatal stomping assault is never raised in these debates, but never mind.)

Hemmes’s more boutique offerings have their own flow-on effects. The Prick begrudges no one their success in this life, but the Merivale Group’s massive capitalisation means millions can be spent fitting out a Chinese restaurant or a Mexican fast-food joint, raising the bar for independents who feel the need to spend money on appearance – rather than food – to keep up.

This also means that the publicity-industrial complex that forces constant “innovation” is sated, but that more and more money again is put into paying PRs and designers than chefs and suppliers.

Is it any wonder that the tides are pushing restaurateurs – and their customers – toward high-volume burgers and burritos and away from sitting down for a few hours with a knife and a fork?

2 Responses to Happy Birthday Mrs Prick at est., and is Justin Hemmes a Great Man or Are We All Hegelians Now?