Posted on December 9, 2013 by chiefprick

Ever since Trollope wrote his indictment of late-Victorian England, the phrase “the way we live now” has been used to label any panoramic novel which captures a moment in time and becomes required reading for literate people of the day – even if the work itself is pretty crap. Think Jonathan Franzen’s The Corrections (entertaining in parts with the best set pieces all but stolen from David Foster Wallace). Or, closer to home, Chris Tsiolkas’ The Slap, that coke-fueled romp through Melbourne suburbia later turned into an all-but-unwatchable ABC series and sent up with aplomb by The Hamster Wheel.

But if a book can limn the essence of a time, what about a restaurant? A recent night at ester in Chippendale suggests that yes, a restaurant can capture a time and place every bit as much as a novel, and be enjoyed more quickly than an 800-page doorstop to boot.

Thus to the Prick’s way of thinking a meal at ester needs to be seen on a couple of levels: Yes, it is a very good, fun, hip, laid-back place to go for a high-end, low-key, sit-down meal with friends. But ester is also a fine-grained portrait of a certain sort of very echt Sydney dining (and living) circa 2013.

The food at ester (no reactionary capital letters here, please) is almost uniformly very good tending toward the excellent, turned out of a big open kitchen dominated by a wood-fired oven and led by Mat Lindsay with, as a waiter tells us, “everything designed to be shared”.

The menu, with its flights of five or six items offered in a series of courses of escalating size, each listed elliptically simply as a verbless triumvirate of ingredients (cauliflower/almond/mint, squid/ink/corn, you get the idea) is perfect for double dates as everyone will be able to try just about everything they are interested in over any given course. (Add a third couple and things could get a bit less Franzen and a bit more Updike, if you catch the Prick’s drift.) Very 4Fourteen, very Nomad, very now.

Marrow – an ingredient of the moment whose time has happily damn well come – at ester is much talked-about among the fooderati, and deservedly so, served as it is in massive split, roasted bones right out of The Flintstones and drizzled with XO chili sauce. The quivering contents are scooped in great hunks reminiscent in texture and jiggle of pan-seared foie gras  onto slabs of hearty woodfired bread.

Raw fish, mulloway on our night, is presented simply and needs little in the way of garnish, though mustard seeds simmered in soy are a touch astringent and distracting. Oven-popped oysters are an exception to the the Prick’s never-cook-‘em rule and are accentuated rather than overwhelmed by a tart horseradish dressing.  Veal tartare is more of a carpaccio affair, pulling apart between forks and foiled by blobs of “oyster sauce” – a bright, verdant blend of bivalves and herbs, not the cloying Chinese stuff one gets out of a bottle – though the promised bottarga is hard to detect. 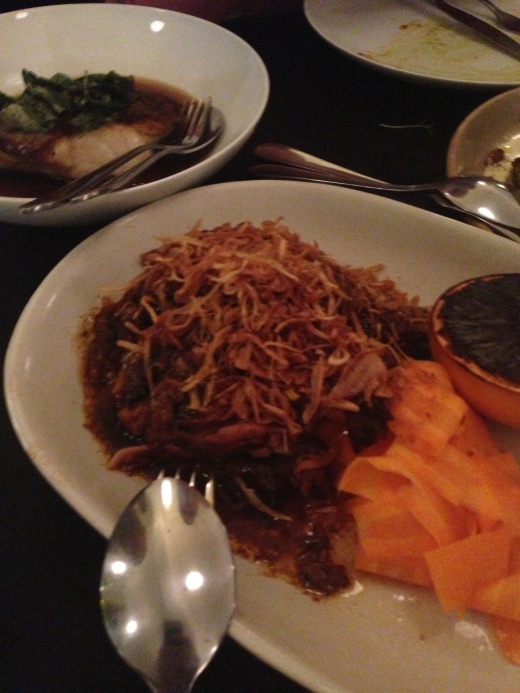 The only real fall-down among the smaller plates is the asparagus. Roasted with a beautiful char, the poor spears are overwhelmed and difficult to eat under a blanket of nasturtium and flowers and powders. Somewhere hidden beneath the foliage is a 62-degree egg whose yolk ought to work as a sauce but cannot quite get to the job because of all the competing traffic on the plate.

Happily, and in contrast to some other kitchens that spend so much time fiddling around with starters that mains come off second best, the big “woodfired” plates are just as good, if not superior to what comes before. And further reflecting the present paddock-to-plate simplicity-loving zeitgeist, the dishes are each about one preparation, one process (perhaps two or three if you count steps like brining, but it is all heading in the same direction). What one does not see is some jumped-up chef trying to show off by cooking some protein three different ways: This ain’t Come Dine With Me Australia after all.

Pork hock is stunning, spicy, roasted, gelatinous, and fall-apart, a mainline to the id of any pig-lover, with a garnish of pickled carrots to clean the palate. A piece of fish (blue eye, from memory) is fine as it is but really serves as a foil for a deep, rich burnt onion broth. Duck is slightly too fiddly, though who knew sticking a cauliflower into a wood oven was such a good idea? We became such a fan of the method some minor consideration was given to building such a contraption out the back of Stately Prick Manor, which is just proximate enough to Leichhardt to get away with.

The Prick is not much of a dessert person, but the “three milks” is a departure from the post-progressive mood of the place, with three different “milks” done three different ways (order it, they’ll explain). Much ooh-ing and ah-ing was pronounced over the other items, but a simple salted caramel semifreddo was perhaps the simplest and best, washed down with a slug of Calvados.

In sum ester may be a pitch-perfect, almost alarming in its lack of dissonance, reflection of the way we live – or at least eat – now. The place feels calculated right down to the slightly uncomfortable chairs and even the name. Our table nearly came to blows over whether the owners named the place after the Biblical queen who headed off a planned Persian genocide of the Jews (this story may bear re-reading in light of current events) or Esther Rolle, who played the matriarch of the ‘70s Jimmie “Dy-no-mite!” Walker vehicle Good Times.

Turns out the name ester comes from the world of chemistry and is defined on the business cards as “an organic compound”. Digging further, the Prick finds that “many naturally occurring fats and essential oils are esters of fatty acids”, which all but defines the kitchen’s tightrope walk between the heavy and rich and the light and zingy. Well played, guys.

Still, the unexamined meal is not worth eating and it is worth asking if the way we are doing things now is really the best way. Sydney’s fine dining crisis is well-rehearsed. Anything that is new and not a burger joint or taco shack is to be celebrated in the same way that sophisticated writing needs to be cheered against the tide of PowerPoint presentations and Buzzfeed listicles which, click by procrastinatory click, are pushing our society back towards the pre-literate.

But is this the way we want to live? Is this where sit-down dining is heading? Take shared dishes. Please. One gets the point but it often as if, like those automatic check-outs in the supermarket, such plates are an innovation designed to benefit the company as much as the consumer. Expediting must be easier for the kitchen: Four different plates don’t need to hit the table at the same time, but can come out in quick succession. Yes, we all get to try everything, but sometimes the Prick feels like the joke about WASPs at a Chinese restaurant: Can’t I just have my own damn plate of food?

On the other hand, if ester suggests that we are swinging back towards grown-up food and dining out, the Prick approves. Plus, it’s a lot more fun than Franzen, especially his recent stuff. What the hell was Freedom about anyway?

7 Responses to Chippendale Review: Reading the Book of ester