CBD Review: Shuckin’ and Jivin’ at the Morrison Hotel

Are oysters a powerful aphrosiac, or just damn delicious? Let’s find out with a trip to Sydney’s new and much-needed oyster bar, the Morrison Bar and Oyster Room! 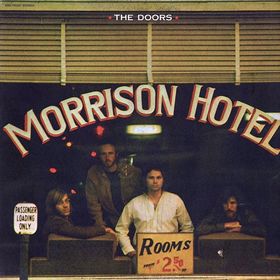 A great album … and a great oyster bar

The Morrison, just opened in Sydney at the site of the old Brooklyn Hotel with a bevy of former head chefs in the kitchen, is marketed as a tribute to the great oyster bars of New York and London. But anyone with eyes to see will also note that it is also a subtle tribute to Jim Morrison and The Doors: there aren’t great Mao posters of the man at every turn like there are of Bruce Lee at Grasshopper, but the signs are everywhere. There are doors – the doors – all over, not just to get in to the place, but also to move between the dining room and the cocktail bar, down half a flight of stairs. Morrison wrote some of his best stuff on acid, and the cups of delightfully sharp mignonette that accompany the oysters are a tribute to the power of acidity to concentrate the mind. Upstairs in the gents, men quietly face the wall and take out their oldfella in silent tribute to the sultry 1969 night Morrison was arrested for indecent exposure. Or maybe they’re just having a piss. 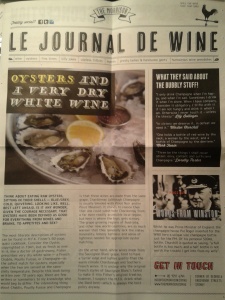 The Finkelstein Review better not shut down this tabloid!

In any case, the Morrison is not a place that takes itself too seriously. It’s a big space, but still crowded as hell on a Friday night with a great energy. It’s a good thing we booked, the urgent need for a date night having made itself felt after a week’s skiing with the children. The maître d’ who seats us looks up our reservation and hands us over to another staffer, telling her, “Table 69”, then to me, sotto voce with a wink and a smirk: “Great table…”. As one who spends his working weeks waiting for HR to tap him on the shoulder for just this sort of sidelong inappropriateness, the Prick appreciates a baudy brasserie.

So, seated, it’s cocktails and menus time: An espresso martini (or “yuppie speedball”, as we call them) for Mrs Prick, while I try the signature Morrison cocktail (really just apple juice and vodka, refreshing but nothing special). The menu comes in two parts. An elegant food menu is supplemented by the tabloid “Le Journal de Wine”, which is one part wine list, one part oyster menu, and one part editorial: boozy quips and aphorisms from Churchill, Dorothy Parker, and Lilly Bollinger; short articles about wine and travel. Again, they’re serious about their food, but they don’t take themselves too seriously. 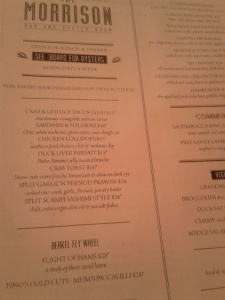 We start the feast with a mixed dozen oysters, which quickly becomes two dozen, all washed down with a Joseph Cattin Pinot Blanc from Alsace. Perhaps a bit more residual sugar than necessary for the task, but I love the varietal. Here I should note that the Morrison’s team is not only clever and engaged but really knows their stuff. Our guy, and indeed everyone we encounter, is that rare breed in Sydney dining, namely, a professional, talking us through the options but never talking down. Not since the old Bayswater closed down in Kings Cross have I seen such a good selection of freshly-shucked oysters. When they’re available, the Morrison even serves those rare beasts, the native Angassi. The winners of the night are from Tuross Lake, plump and steely, though the James Magnussens of the night would have to be the Lake Wapengo rock oysters, which lost gold in our books by only a fraction but were rich, creamy and herbaceous in a way I’d never before known a straight, raw oyster to be. 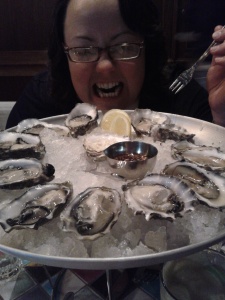 The Morrison takes a bit of a risk in offering a full menu along with their slate of oysters (which changes daily, about a half-dozen varieties at any given time): by the time the big dishes come, many diners will have already had what they consider to be the main event, and those bivalves are a tough act to follow. This kitchen pulls it off, though: we build a little degustation of crab “tacos” (very more-ish, if a bit salty, these would be great at a cocktail party) and deep-fried chicken “lollipops”, though there were a number of other nibbly plates I’d like to get stuck into next time. 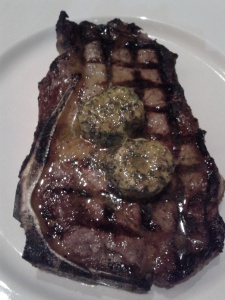 Steak on a plate!

We finish off by sharing the 350g sirloin on the bone, a great cut only enhanced by its being cooked over a charcoal fire, and some thrice-cut duck fat chips, and though the place is hopping no one is pushing us to finish as we linger over the last glasses of a savoury but austere shiraz-viognier from Bendigo. I’m told, though I don’t recall seeing it on the menu, that they also offer a 1kg t-bone for sharing, and that is surely a must-have dish for our return.

In the meantime, the Morrison is a great addition to the city’s dining scene, and along with dinner I could see it doing a strong lunch trade among those who still have the sorts of jobs where one can afford to camp out a table at 1pm and stay for closing. The Pricks will be back for sure.

Oh, and as for the opening question? Visit the Morrison and find out for yourself!

13 Responses to CBD Review: Shuckin’ and Jivin’ at the Morrison Hotel

Leave a Reply to Steve at the Pub Cancel reply