Cooking With Kids: Australian “T”, Duck Ravioli, and the Radishes of Irony

Remember when truffles were a big deal? Sure, they’re still a big deal, but they’re not a big-big deal anymore, if you know what I mean. This year’s truffle season – and how great the foresight and how deep the patience of those clever folk who a dozen or so years ago decided to seed their properties – seems to have produced a bumper crop, to the point where they are now selling hunks of vac-sacked Perigords in Harris Farms for twenty bucks a throw. Not chump change, but not the heavy freight demanded in the old days when the only truffles one could get in this country demanded business class airfare from Italy as part of their appearance riders either. I tell you what, kids these days don’t know how easy they’ve got it.

Take the Little Pricks for example.  We found out that young Nick With a Fork had a bit of a win with his selective schools exam just before the weekend, and as such there was barely a second thought given to adding some celebratory truffle to the big Saturday morning produce shop: Hell, given the private school fees he’s just saved us, we could take him to Sepia every week of the academic year and still come out ahead. Thinly shaved, the truffle would go well with the weekend’s big cooking project, duck ravioli.

Now ravioli, indeed filled pasta in general,  is one of those things a lot of people find to be too fiddly, too much of a pain, and too much of a risk – all that work can turn into a pot of boiling water and crap if you’re not careful – to be worth the effort. Nonsense: As a wise man once said, “If you’ve never missed a flight, you’re spending too much time in airports.”

And as the Prick might say, “If you’ve never had a dinner go completely tits-up, you’re not cooking enough.”

As these things go, duck ravioli is comparatively easy. We started out by putting a flock of duck Marylands which had been cured with salt and herbs overnight Friday in the sous-vide for about 12 hours at 76 degrees, bagged in pairs with a couple of tablespoons of duck fat (a few are sitting in the fridge for a nice winter weeknight’s dinner).

The next day, we got our hands dirty:

The key here is to shred the duck reasonably finely: Big hunks will interfere with the pasta, and could even poke holes in the dough. To the meat we added a tub of ricotta, a little salt, thyme, and chives. Then it was time to make the pasta.

Some cooks like to make nice round discs, but in a concession to trying to teach children how to do this and the fact that the Pope was not joining us for dinner thus throttling back the need for spectacularly uniform presentation, we used the tried-and-true “fold” method, sealing with egg wash, trimming, and then carefully squeezing out the air:

(For anyone playing along at home, that pasta dough was five eggs and 500 grams of 00 flour, kneaded and allowed to rest before being run through the machine to the second-thinnest setting.)

And before we knew it, wa-hey!

The sauce? Something simple: Jerusalem artichokes sautéed down with a good slug of madeira, and left to simmer with some brown chicken stock before being blitzed and doped up with chives and cream and seasoning.

And, of course, truffles:

Duck, cream, and truffles: Perfect together

Oh, we also knocked up a quick crudo of snapper, preserved lemon, and herbs. But this was mostly to teach the boys, who’d been asking, the meaning of “ironically”. As in, “Even though dad thinks they’re kinda wanky, he’s put some thin discs of radish on our starter … ironically!” 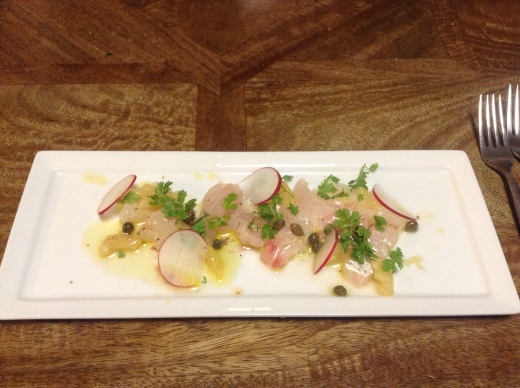 Yes, I know the forks are on the wrong side. I haven’t taught the Little Pricks proper front of house yet.

The thing is, they actually worked, too.

3 Responses to Cooking With Kids: Australian “T”, Duck Ravioli, and the Radishes of Irony